How to use ovulation test strips

Ovulation is the release of a mature egg from the ovary. It signals the beginning of your fertile period. The best or most fertile time to get pregnant is the period before and during ovulation. LH (Luteinizing Hormone) is one of the hormones produced by the pituitary gland. It is secreted at low levels throughout your menstrual cycle. Once a developing egg follicle reaches a certain size, LH secretion surges to high levels. This hormone surge is what triggers ovulation about 24 to 48 hours later. Your LH surge is important because it initiates the beginning of ovulation. Conception is most likely to occur within thirty-six hours following the LH surge. The LH Ovulation Test (ovulation predictor kit) is specifically designed to detect your LH surge – the time when you are likely to ovulate. 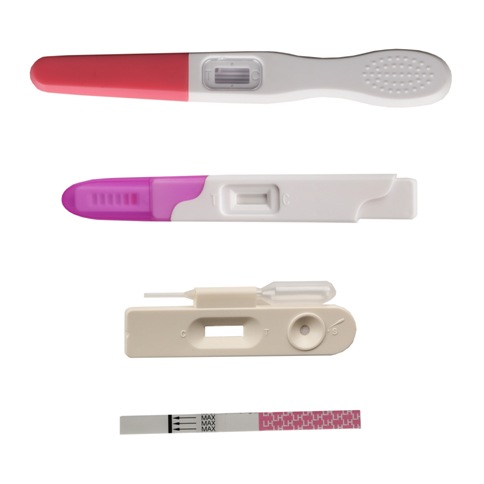 What day should you start testing for ovulation?

Your most fertile days of the month are 1 to 2 days before and after your ovaries release an egg. Sperm can live in the body for up to 5 days. So, conception can occur if you have intercourse 5 days before ovulation, and up to 1 day after ovulation.

Predicting ovulation is easier when you have a regular menstrual cycle. With a 28-day cycle, you will likely ovulate on or around day 14, so you will want to start testing around day 10 or 11.

When is the best time of day to use an ovulation test kit?

There is no wrong or right time of day to test ovulation. Some women prefer to test their urine in the morning, whereas others test it in the afternoon or evening. Whatever time you choose, make sure to test at the same time each day.

How to do the test?

Ovulation tests are designed to detect levels of luteinizing hormone (LH) in your urine. Urinate in a clean, dry cup and dip the test in the urine for few seconds. Results are generally available in about 5 minutes.

The test line appears lighter when you have a low level of LH and it will appear darker when there is a higher level of LH in your body.

How to read the results?

Your result is positive if two color lines are visible and the test line is equal to or darker than the control line. A positive result indicates the presence of a high amount of Luteinizing Hormone or LH surge. Make love following the first positive test result to maximize your chances of becoming pregnant.

Your result is negative if only one line is visible or the test line is lighter than the control line.

Your body produces Luteinizing Hormone every day during your cycle and you will always have some amount present in the urine.

That is why you will see a test line on most of your tests. This is a healthy sign. Just remember, that the result is considered positive if the test line is at the same intensity or darker than the control line.

For some women LH surge can last a couple of days, while for others it only lasts about 12 hours. Please keep in mind that every cycle is unique. Some women do not ovulate every cycle and will not see an increase in LH levels during these non-ovulatory cycles.

Certain medical conditions and medications can adversely affect the performance of the test: for example, if you are pregnant, have recently been pregnant, have reached menopause or have polycystic ovarian syndrome (PCOS) you may get a misleading result. This may also be true if you are taking fertility drugs containing Luteinizing Hormone or Human Chorionic Gonadotrophin. Clomiphene citrate (Clomid®) does not affect the tests, but may affect the length of your cycle and, therefore, when you should be testing.